We are delighted to be able to partially reopen Colwell Arts Centre from the 26th April 2021 on a strict appointment-only basis. To collect, return or exchange an instrument, please contact us at glosmusic@gloucestershire.gov.uk to make an appointment.

We understand at these difficult times that some families will be finding payment of these invoices challenging, especially where you might have significantly reduced incomes. We do not want to let money be a barrier to your child continuing to learn on the instrument they have chosen and we have made funding available to support this. Please click here to complete the COVID-19 Instrument Hire Help form and email to mark.medland@gloucestershire.gov.uk

Recording studios helping young people to make, record and produce their own music. 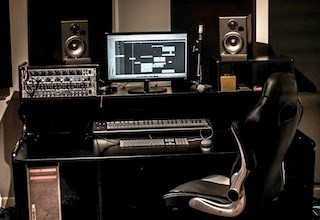 Hub partner The Music Works (previously Gloucestershire Music Makers) has been running low price (in some cases, free) studio/rehearsal sessions and workshops in Cheltenham, Cinderford, and Gloucester, supported by funding from the Hub and from Youth Music.

Any young person (or adult) can use the three studios - Studio 340 at County Community Projects (CCP) in Cheltenham, SoundSpace at The Eact Academy (previously Heywood School), Cinderford, and Guildhall, Gloucester – and get access to professional recording equipment, and support from sound engineers and tutors who specialise in working with young people.

Malaki Patterson, senior music leader and mentor, and studios manager/co-ordinator, says: “The aim is to tap into the potential and motivation of young people to lead their own music making activities and work independently. We help them to write songs, rehearse, record, as soloists or in groups/bands, and to learn through reflection.”

We talked to Malaki about Studio 340 in particular, although similar facilities are available at the other two studios. Contact Malaki for details: studio340@ccprojects.org.uk call 07532 212462 or visit the Studio 340 Facebook page https://www.facebook.com/studio340. Over to Malaki:

Studio 340 at CCP is on the high street in Cheltenham, and is used by around 70 young people currently, many coming back every week. At any day you might find a band rehearsing in a practice room, a soloist working with one of our tutors to write and record songs, someone teaching an instrument lesson, and a group of young people learning about beatboxing, or music production, at one of our regular workshops.

There’s a Youth Steering group, and members help to organise live events and work in the studio as volunteers, and we also work with schools.

It’s a community recording studio and so our prices are subsidised: anyone can use it for £10 an hour – which is less than a music lesson! – and get access to a recording studio and engineer/music tutor, a rehearsal room, helping them to create, rehearse, produce and record their own music.  We can also offer free or subsidised sessions for young people depending on their circumstances – we offer free sessions for people in CCP’s supported housing, for example.

It’s open to anyone from beginner to advanced, whether people want to just look at the software and get to know how music-making works, or they’re already making music and just want to produce professional sounding recordings.

When is it open and who works there?

It’s open Monday to Friday, 10am until 3pm for people to drop in, but if we have bookings, we’re often open from 9am until late at night, including at the weekend. There are five tutors working here including me.

It’s used a lot during evenings, for recording or band rehearsals, and it’s quieter from around 3-5pm and during the daytimes – we’re keen to work with schools and we already work with one school, Marlowe, to help their students to work on their Arts Awards. We’re accredited to provide mentoring and Arts Awards sessions and can give school prices for that kind of service.

There are workshops coming up like Songwriting on Tuesday 27th January from 5-7.30pm; Beatboxing on Thursday 26th February from 5-7pm  – and they only cost a fiver. Then we have four music production classes – a taster, one for beginners, one for intermediates, and an advanced class on Saturdays from 28th February, 10am-1pm for the first/taster and 10am-3pm for the rest.

What is a typical ‘day in the life’ of the studio like?

It’s really difficult to describe but it’s really exciting - every activity is so diverse. We have all sorts of stuff going on here every day - spoken word, reggae, pop, hip-hop … anything is possible! We’re going to be making a short film on a ‘day in the life’ with the help of the Hub so soon people will be able to get a taste of it before they come here. The best thing is for people to visit our Facebook page to get an idea of all that goes on as we regularly post photos and videos.

We also run a monthly stage at the WholeFoods Supermarket in Cheltenham, and this year the Borough Council have asked us to programme the music at the Montpellier Fiesta, the big outdoor event in Cheltenham which attracts over 2000 people.

Can you tell us about a couple of young people who’ve benefited?

There’s one young person who I originally met through Gloucestershire Hospital Education Service, where I do music mentoring. GHES provides education for young people who can’t attend mainstream school because of physical, mental or emotional ill-health. After he finished there, I suggested he came to Studio 340 so that he could continue to get support with his music. He applied to Birmingham Orminston Academy (similar to The Brit School) and needed a bit of help because he wasn’t used to being in a school setting, and at one point he started getting behind with his course work and was on the verge of being asked to leave. But thanks to the tutor here he caught up with all his assignments and looks on track to pass his BTEC Level 3 Diploma in Music Technology.

Another example is Angus Clements who’s 21 and has just got a new music video out (see https://www.youtube.com/watch?v=wV6B0F4piQU), all recorded at Studio 340. Originally, he was just doing acoustic singer/songwriter stuff, but he didn’t have a band and so wanted to make it sound better. Kingsley, who’d just finished college and started volunteering then working with us, said to him, I think I can produce it a bit more, help you get a bit more interest for your music. So he started working with him to mix the tracks, make them sound better. He’s gone from being a singer-songwriter to being a recording artist.  The studio’s been great for him because it’s helped him realise what he’s capable of.